Turkey has a very old history, as per the available record in 47 AD Saint Paul started establishing churches throughout the Turkey region. In 330 Constantine the Great is took the decision to make Byzantium as the capital of the Roman Empire, in 527 Justinian became Emperor of Byzantium and in his period the great building of Hagia Sophia cathedral started and it is completed in 537.
Later on, the Ottoman Empire is founded by Osman 1 in 1299. When World War 1 started in 1914 the Ottoman Empire was allied with Germany in 1919 the World War comes to an end. Ottoman Empire was defeated as a result a movement of Turkish Independence started which was lead by a military officer  Mustafa Kamal who was called Attaturk which means the father of Turks and ultimately in 1923 The Republic of Turkey came into being.
Turkey is one of the most favorite destinations for tourists from all over the world. It is very beautiful and has fantastic historical places to visit all over  Turkey.
First of all, you have to get a valid Entry Visa. You can easily apply online if your country is falling in the approved list of e-Visa countries.
You can travel from all over the world by Air, BUS, SEA, and TRAIN, this link can help you with your tour planning.
Turkey is very busy because tourists are coming daily in millions so it is advisable to plan your tour very carefully. For the booking of hotels, I am providing you a Link of the best available option. You can also search online but it is better to arrange before traveling to avoid blackmailing of agents over there.
I planned my visit to the month of Feb which was too good as per my experience because spring was near to start and the weather was very nice and pleasant.
I took a flight from Quetta (Pakistan) to Istanbul (Turkey) via Dubai. After spending thee hrs in the Dubai Airport lounge fly for Istanbul. We reach by the late evening. I took a taxi and rush to my hotel after getting fresh up I took around to the near market purchase some necessary items for my next day trip. 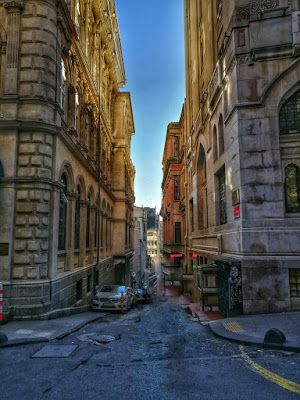 The next day just after taking breakfast  I start my visit to Istanbul. It is the major city in Turkey. It is one of the most populated cities in this county. It is the main center of economic, culture and history. Its old historical name is Byzantium and Constantinople. Major tourist attractions are The Blue Mosque, Topkapi Museum, Grand Bazar, Bosporus, and Hagia Sophia Museum. Each one of these is a fantastic place to visit. we spend the almost full day but we feel it was not sufficient. It is hard to explain all places in details so I am mentioning a few facts about Hagia Sophia. 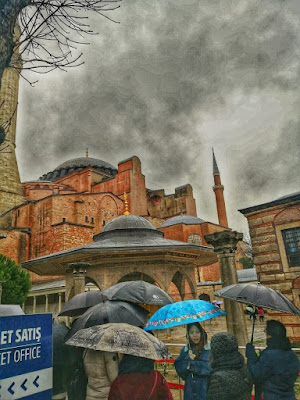 One of the most unique and important buildings ever constructed. Its wide flat dome was a daring engineering project in the 6th century. It was built in 537 AD by Emperor Justinian as a Cathedral church, later in 1453 Mehmet Conqueror claimed it as a mosque. It was served as a revered mosque until 1935 when Mustafa Kamal Ataturk proclaimed it as a museum. In 2007 its one room on the eastern side was opened for the prayers.
Pamukkale.
We spend some time to visit these runes we move to Karahayit village to visit. Traveling between cities in one day is quite difficult, but if you hire a tour operator then it will be easier to move the door to the door. The next day our plan was to visit Pamukkale. This tinny town is the UNESCO World Heritage site. I wake up early in the morning because we have to take a flight to Denzil. It was an hr flight but an aerial view of this city was so beautiful. After getting out of the airport we rushed to explore the red ancient runes of Hierapolis, one of a great historical place, it is near to modernity famous red sprig of hot water.
Passing through the village streets full of fresh fruits and vegetables we reach to thermal red spring leading to the bathing pool. Iron particles give a reddish look to the Travertine. Just spending 15 TL and walk through shallow water with bare feet toward the Mud pool and enjoy an amazing experience. Next, we move to Pamukkale.
Pamukkale means in Turkish Cotton Castle. In real when you reach there you will feel yourself in a cotton castle because all around you there is white Travertine formed by limestone deposited from minerals of Thermal spring water. Walking barefooted in hot shallow water is a unique experience. You can swim in these thermal pools, as they are not so deep. 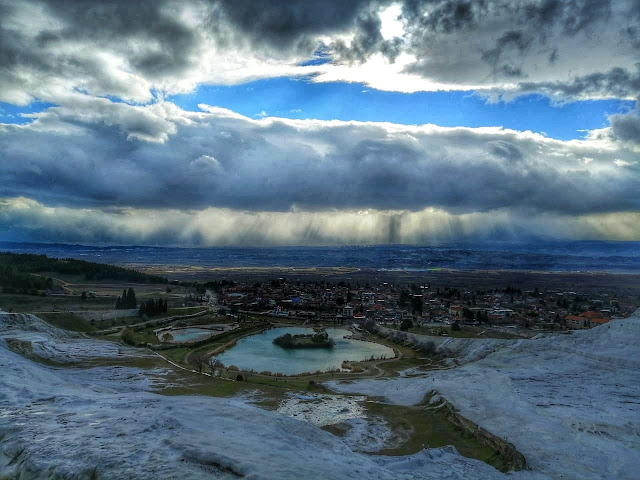 There are so many other places to visit but due to a shortage of time, we just left for Antalya. You have two option for traveling one by Bus its cost about 10 to 14 $ and take almost 4 hours, the other option is to drive in the car its cost about 30 to 45$ according to your bargaining capacity and traveling time is about 3 hrs and 30 mints. we travel in the car and reach there by the late evening, directly went to our hotel which was booked online.
Antalya is the fifth most populated city in Turkey. It was an old Roman port. It is also called Turkey resorts city with the yacht-filled old harbor. It is a gateway to the Southern  Mediterranean sea region. It has a very beautiful beach in shining blue water. Ancient runes of old Roman city Aspendos are the best historical place to visit and it is just 40 km from Antalya. Full of nature and beautiful waterfalls can be seen in lower and upper Duden which is just 15 km from Antalya. Local buses are easily available. Another major attraction for the tourists is the Hadrian gate.
These gates were built in the Honor of Roman Emperor in 130 AD. 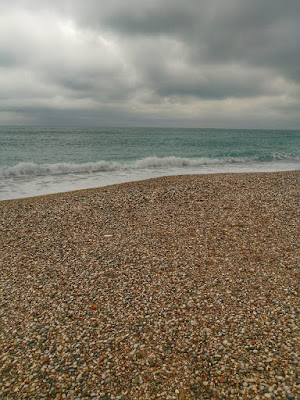 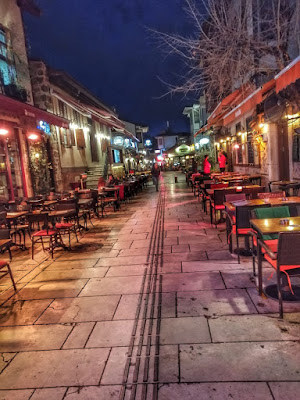 Our next destination was Cappadocia. There are many ways to travel like Bus Air and by car, but we opt to travel by bus because it is the cheapest way and the time difference is only 2 hrs. It operates twice daily we took an afternoon bus directly to Göreme which is just near to the famous Fairy chimneys " cone-shaped rock formations". we reached there by the late-night so we directly went to our hotel. 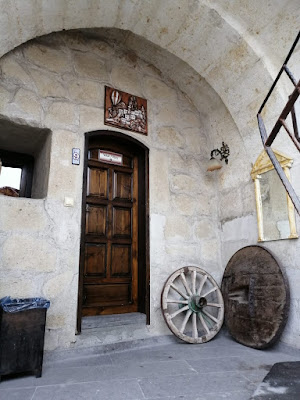 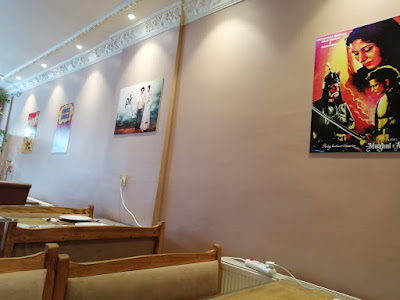 We were very disparate to see our hotel because it was briefed us as Cave Hotel but when we reached there we were quite surprised to see a very nice neat and clean hotel. We went to bed immediately to enjoyed a good sleep as we were tired too much.                                             Cappadocia
It is a piece of a magical land in Turkey. It has very picturesque views to see and when you visit it practically you will feel the word Magical is not sufficient to explain its beauty. At least three days require to visit this place. There are so many wonderful places to visit like Pigeon valley, Red valley, Hot water Lake, and an underground city. Every place needs a long time to visit in detail. all places are unique and have a different story. Hot air ballooning is a totally different experience. It is just amazing when you fly in it. The aerial view of this beautiful place will mesmerize you especially when it's fly our the Fairy Chimney it gives a marvels look

Although we spend quiet time to visit this beautiful city still we were not satisfied and like to stay more but it was not possible.
here I am sharing some of the memorable pictures of my tour, hope you will like it.

https://www.youtube.com/watch?v=e6reW7R2UIs
Please do share your feedback for the betterment and correction. I shall be grateful

Popular posts from this blog

Islands are always known for their natural beauty and fantastic locations. Isle of wight is one of the UK biggest Island. It is also famous for its beautiful beaches such as sandy shanklin beach and south facing Vantore beach which is also known for its vantage huts. It also have very amazing sea upfront.
we planned to visit this beautiful Island. On 24th feb 2019 me and my family move from Romford to Port of Southampton early in the morning. It was nice shiny day we reached their by 8:30 am. Our booking of ferry already done on line through LINK
After taking light breakfast we just start waiting in Que in our car as it was due within next 30 mints. We were feeling pleasure and thrill in our heart and patiently waiting for our turn.

Our beautiful ferry was standing in front of us and we slowly start moving toward it, we park our car in parking area and moved toward sitting area. We were too excited. We took a round of whole ferry and select a sitting place on top bec…
Read more 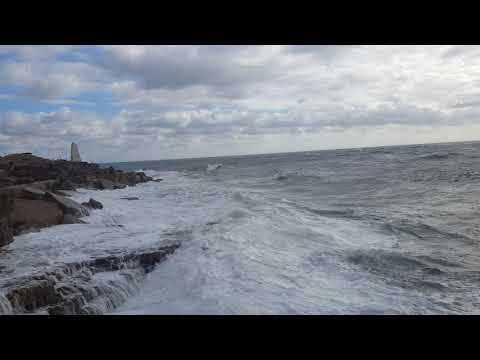 The Isle of Portland is one of most beautiful visiting place
Stunning views of round coastline can be enjoyed here
If you like walking or cycling then it is highly recommended place because a lot of scenic places is near to each other.
The South West Coast National Path trail is most famous and is about 13.2 miles long around the Island.
If you visit this place in summer it will be an unforgettable summer because a lot of water sports events held here.
The sky is full of colourful kites and gliders because winds blowing here are most reliable for Wind and Kite surfacing.
Chesil beach and Portland Harbor are favourite for different water games like Angling, Scuba diving to shipwrecks, Snorkeling and Swimming.
The limestone cliffs are used for Rock Climbing.
Some areas are used for Bouldering and deep water Soloing and Sport Climbing with bolt protection is most common here.
This area has a proud to host Olympic and pre Olympic water games from 2005 to 2012

masood
I am a retired Engineer and like to visit where ever its possible.